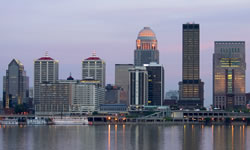 Recent jobs reports underscore the persistent need to create more and better jobs. However, economic developers aren’t likely to find those jobs if they go looking for them in the wrong places.

For example, many economic development organizations still focus heavily on recruiting large firms, even though that approach has yielded diminishing returns for quite some time now. Since 1995, business recruitment efforts have yielded only around 2 percent of all new jobs created nationally, and less than 1 percent of all net new jobs created, since large firms often shed jobs when they relocate. Moreover, the combination of depressed deal supply and increasing demand for more jobs has been fueling an arms race among states that are addicted to this approach, wasting scarce resources that could be put to more productive uses.

In response, some regions have shifted their focus to start-ups, and have been putting infrastructure in place to launch more of them. However, contrary to popular belief, when you factor in the firms that didn’t survive, start-ups have only yielded around 7 percent of all net new jobs created since 1995. Moreover, the Kauffman Foundation reports that new start-up ventures have been smaller and less likely to survive in recent years, and those that have survived have created fewer jobs, leading to a steady decline in the rate of job creation from start-ups.

So, where have the rest of the new jobs been coming from? Over 90 percent of them have come from the expansion of existing businesses. And recent research suggests that the vast majority of those have come from a relatively small number of high-growth firms – as few as 1-6 percent of all firms. 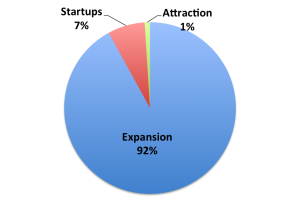 Clearly, that’s where economic developers ought to be focusing their job creation efforts – on high-growth firms where they can get the biggest bang for their buck. However, that’s easier said than done.

As it turns out, high-growth firms can be very hard to find. They tend to be relatively small and widely dispersed across a wide geography and a wide range of industries. They tend not to seek assistance or join established business organizations, making them less likely to appear on anyone’s radar. And they tend to grow in fits and starts, which means that if they do show up on on the radar one year, they may not show up the next.

To complicate matters further, the firms that do show up on the radar are not necessarily the ones that need the most help, since they are already experiencing high growth. It’s the ones that have the potential to achieve high growth, but are stuck for some reason, that economic developers really need to focus on.

Those “high-potential” firms can be hard, but not impossible, to find. In many areas, representatives of local chambers and economic development organizations routinely call on local businesses to gather information about their status and their needs, often using software programs to aggregate and analyze this information. Those “call programs” can be very helpful in identifying potential high-growth firms and their needs if they gather the right information from the right people in the right firms.

Unfortunately, that’s a big “if.” Too often, local chambers and economic development organizations are mainly interested in seeking support for themselves when they call on firms, rather than looking for ways to offer their support to those firms. As a result, call programs often put a premium on larger, potentially high-contributing firms, leaving smaller firms with the greatest potential for job growth to fall through the cracks.

It can be difficult to break out of that pattern, especially if budgets are tight. But it’s well worth the effort. Without a good ground game, economic development organizations are left with only high-risk, low-return job creation strategies to fall back on.

The starting point of a good ground game is gathering the right information from the right people in the right firms. But the fundamentals also include analyzing that information to identify where the least amount of effort can make the greatest difference, and building capacity at the local and regional level to provide the right assistance to the right firms at the right time.

Those fundamentals may sound like common sense, but ironically, even though they have the most potential for job creation, they currently get the least attention, and have the fewest resources and weakest infrastructure to support them. If we really want more and better jobs, rectifying that disparity would be a good place to start.